The ongoing project concerning the Justice sector in Georgia “EU4Justice” recently presented its achievements at the 5th Steering Committee Meeting on October 9th.

The ongoing project concerning the Justice sector in Georgia “EU4Justice” recently presented its achievements at the 5th Steering Committee Meeting on October 9th.

The project set out its plan for the remaining period before the members of the committee, in the presence of Ms Mzia Todua – Acting Chairperson of the Supreme Court, Mr Giorgi Mikautadze – Secretary of the High Council of Justice (HCoJ), and Mr Peter Danis – Programme Manager at the EUD in Georgia.

Key reform areas included disciplinary law, regulations related to the efficient work of the HCoJ, and reform of the High School of Justice. This year’s Justice School was recognised as successful by the beneficiaries and attracted a lot of attention for the improved efficiency of the Judiciary in Georgia.

Major progress was achieved in terms of the formulation of the Fourth Wave Judiciary Reform amendments, working together with the Georgian Parliament, as a consensus on the majority of the issues between representatives of the Judiciary, Parliament, Ministry of Justice, international organisations and NGO Coalition, was reached at the end of July this year.

Other key achievements were the draft amendments on the independence of the Judiciary – the formulation of clear grounds for disciplinary violations, better stipulated regulations, statute of limitations, financial guarantees for the budget of the Inspector’s Office, accountability guarantees and more transparency.

The project provides training on the drafting of judgments and matters related to EU law, and specific IT improvements. It advises on how decisions of the High Council of Justice can be better reasoned, with guarantees of transparency and accountability through public hearings, the publication of draft normative acts, regulations on conflicts of interest, and clear distinctions between individual legal acts and administrative acts issued by the HCoJ.

Oliver Mader, project director for Human Dnamics concluded that “this project has continuously delivered targeted high-level advice to relevant counterparts of the Georgian Justice sector. It has effectively supported
a key service to Georgian citizens over a long period and has made a difference for the country. Repeatedly, the Supreme Court, the High Council, the Constitutional Court and the Minister have expressed their gratitude for the assistance provided. It is therefore a pleasure to discuss further extensions beyond the present project period far into the year 2020.” 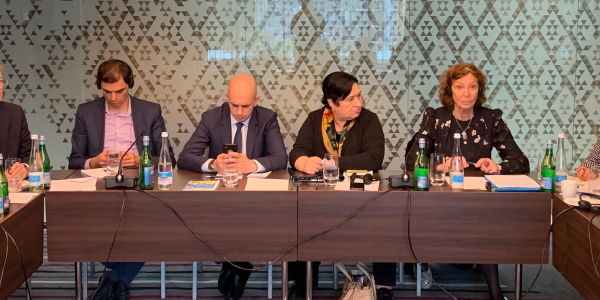